The following piece appears on the University of Cambridge alumni’s website.

Reflections of Along the Golden Road From Samarkand: A Journey through Central Asia, 10-24 April 2018

A recent trip to Uzbekistan and Turkmenistan offered a glimpse into a different world from the everyday, in terms of society and history. Through the guided eyes of an academic scholar on the region—Professor Charles Melville—the Distant Horizons tour provided an opportunity to actively learn and engage with the history as encountered on the journey. Having taken a Chinese art history course that ended a week before the trip started, I wanted to continue the theme of learning and also connect my art history knowledge of the Silk Road from China’s Tang Dynasty with my travel. Our itinerary included important cities of the Silk Road such as Samarkand and Bukhara in Uzbekistan, and Mary and Merv in Turkmenistan.

Since declaring independence in 1991, both Uzbekistan and Turkmenistan have had to create a national identity and narrative independent of the Soviet Union, something which each has done by drawing on their rich histories. The creation of a national narrative is used to legitimise the founding and subsequent leaders. Of course, history of the region is not confined to arbitrary borders. There are numerous intersections between the history of Uzbekistan and Turkmenistan, and their neighbours. The “Silk Road”—or “Silk Roads” as there were different routes—although a modern invention, is perhaps a useful frame for understanding the development and transformation of not just these two countries but of the region. The level of cultural, economic, social and political interactions of the various civilisations and communities across this region over time can be understood from the trade that occurred along the Silk Roads.

Uzbekistan, as seen through the lens of art, architecture, food and cultural history, is multifarious. The diverse ethnic groups that populate the country such as Uzbeks, Russians, Tajiks, Kazakhs, Karakalpaks and Tartars indicates a rich cultural history. For example, the ornamentation of pottery and ceramics we saw throughout Uzbekistan demonstrated the intercultural influence of China, Islam and the indigenisation of these influences. The recurring naturalistic themes such as birds, pomegranates, fish, flowers and other motifs appear throughout both ancient and contemporary ceramics. At its simplest, geometric patterns not only decorated ceramics but also walls of madrasahs, mosques and other architectural forms. However, the design of Uzbek pottery also vary widely from region to region. The prolific use of cobalt blue across Uzbek ceramic demonstrates the impact of Chinese ceramics. Much of Chinese ceramic production was streamlined and standardised with Jingdezhen becoming the largest centre of production not only in China but in the world by the 14th century, as a result we see much less regional variation. Whereas in Uzbekistan, ceramic and pottery production was very much, and still is, localised. The style found in Bukhara today is earthy and perhaps cruder than those made in Tashkent.

As we travelled across Uzbekistan, I was surprised at how much of the historical sites have been restored, from Samarkand to Khiva (Fig. 1). Although the craftsmanship remain largely true to original designs, it invites us to think about the true extent of these structures and cities before becoming relics of the past. The Ak-Saray Palace in Shakhrisabz is a good example (Fig. 2). Not much remains of Timur’s summer palace, aside from the giant portals that stand either side of the square. Started in 1380 and taking 24 years to complete, what is left of this grand palace are the beautiful filigree mosaics that adorned the portal. While the enthusiastic restorers have not affected the Ak-Saray, its surroundings are a different matter. From a new shiny statue of Timur to theme park rides on either side of the main thoroughfare to the palace, it strikes me as a desire to Disney-fy historical sites but at the same time demonstrating restraint in restoration and pride in Uzbek history, however the contradictions may work. 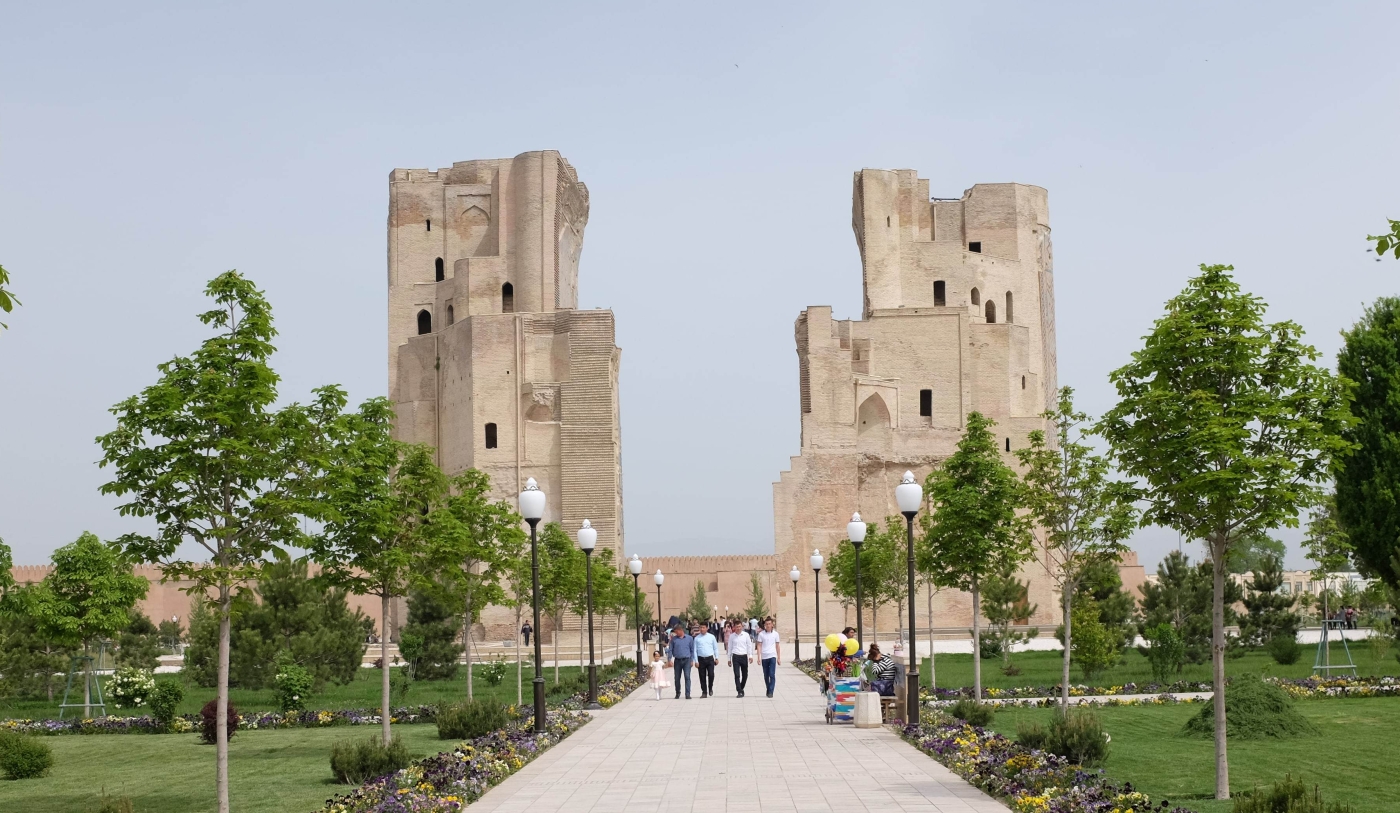 The cultural interactions as facilitated by the Silk Road remains part of popular imagination today and are romanticised. Yet, the artefacts on display in the museums in both Uzbekistan and Turkmenistan suggests that the peoples of Central Asia from Sogdians to Sassanians to the Chinese were as cosmopolitan, perhaps even more so than their contemporaries. The 7th century Sogdian mural in Afrāsiāb demonstrate the extent of socio-cultural interactions. Of most interest to me, are the scenes depicting Emperor Gaozong and Empress Wu Zetian (Fig. 3). The Emperor is shown in a hunting scene and the Empress –shown larger—in a boat with her attendants, possibly celebrating Dragon Boat Festival. The other murals show ambassadors bearing gifts to Sogdiana. The extent of cultural exchange and diplomacy already present in the 7th century reinforces the significance of Central Asia in world history. More importantly, the notion of Silk Road, while modern, is helpful to interpret and understand how Uzbekistan is a multicultural and multi-ethnic society today. Everywhere you look, there is diversity and heterogeneity from its history to its economy. The collapse of the Soviet Union has given rise to small to medium sized enterprises, unlike its Turkmen neighbours. The amount of localised capitalism is so distinct from the state-controlled economy of Turkmenistan.

From a cultural historical lens, my travels in Uzbekistan have shown me the need to reflect on history as a way to interpret the present. We may very well say that the 21st century is cosmopolitan, full of technological advances and we are thus, sophisticated and cultured but is this really the case? When borders were so porous and national boundaries were fluid, as they were in the 7th century, all this contributed to the flourishment of cultures and societies, also of course, wars.

Turkmenistan felt subdued in comparison to Uzbekistan, as indicated by the number of tourists at historical sites and general commercial activity. Ashgabat on first encounter is new, glittering, excessive and perhaps paradoxically, sparse. The monumental nature of many buildings from government ministries to state-built apartment blocks are blindingly white with little to offer for the imagination, save for the shape of some of the government ministries, for example the Ministry of Foreign Affairs has a globe atop the building (Fig. 4). For a million people, the sprawling city is so vast and with little human activity that one would expect from most cities, such as business activities, local shoppers, commuters, or general hub-bub – Ashgabat did not offer much insight into the daily activities of its people, if they were at all visible. The excess of Ashgabat—with its marble buildings and golden trimmings—may demonstrate the power and authority of the Turkmen state and its president, Gurbanguly Berdimuhamedow, whose portraits were plastered everywhere, but once we left Ashgabat that dominance faded, until you enter public buildings. Our drive to other towns showed how the excesses enjoyed by the centre failed to materialise in the rural areas. So much of the fields and soil we saw on our drives were coated with salt. For all that is spent in the capital for show, it would only seem sensible to divert some of the capital to combatting salinity.

Despite, my misgivings for the Turkmen capital, travels to Merv, Nisa and Khorezm, conjured up images of a rich cultural history with so many intersections with its Uzbek neighbour and beyond. The huge expanse that is ancient Merv requires a lot of imagination to see what it was once like as the capital of the Seljuk sultanate and a thriving metropolis of the Silk Roads trade up until the 12th century before Genghis Khan razed it to the ground. Merv never fully recovered from the Mongol invasion. The restoration of the Mausoleum of Sultan Sanjar shows a small proportion of the beauty of the architecture that would have once stood in Merv (Fig. 5). The painted details on the walls show the combination of geometric patterns and stylised vine-like patterns. While far less ornate than many other buildings seen in Uzbekistan, the simplicity of its painted wall patterns and brickwork demonstrates how design and beauty can be achieved through using minimal materials. The brickwork as seen in the Mausoleum of Sultan Sanjar and the Kutlug-Timur minaret in Kunya-Urgench (Urgench was the capital of the Khorezm region, which was part of the Achaemenid Empire) show that style and harmony can be created through brickwork (Fig. 6). 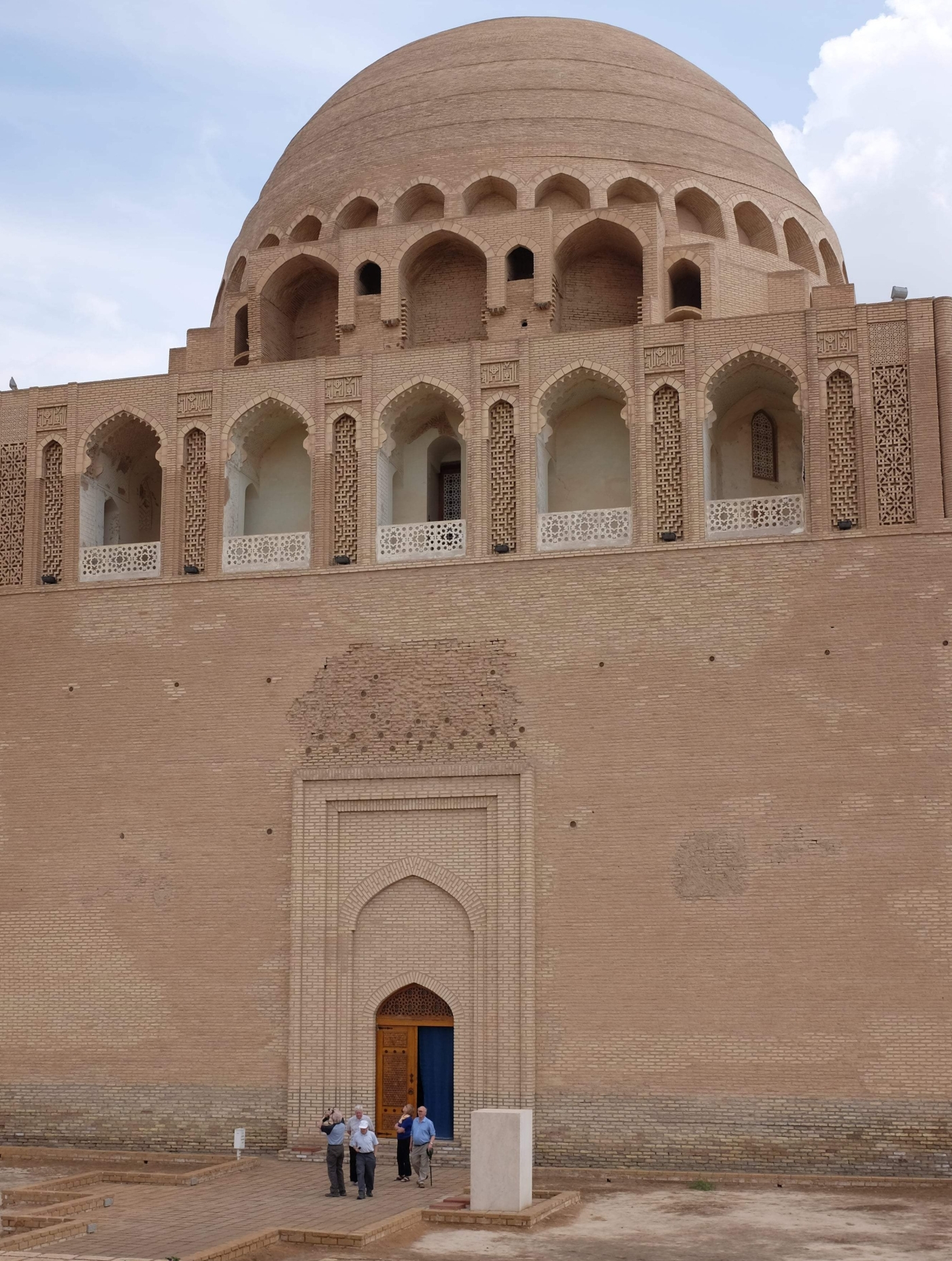 Where Merv required an imagination to visualise its grandeur, Nisa demands us to have an even more active imagination. As the first capital of the Parthian Empire, which dominated this region of central Asia from the mid-3rd century BCE to the early 3rd century CE, what is left of it today are its fortress walls. There are sherds littering the sites in Nisa and one can only imagine what daily life was like. The amazing rhytons—ceremonial drinking horns made from ivory—we saw in the state museum in Mary, many were found in Nisa. Trying to connect the details seen on the rhytons and the vast expanse of Nisa, I can’t help but imagine the excesses enjoyed by ancient kings of the past. 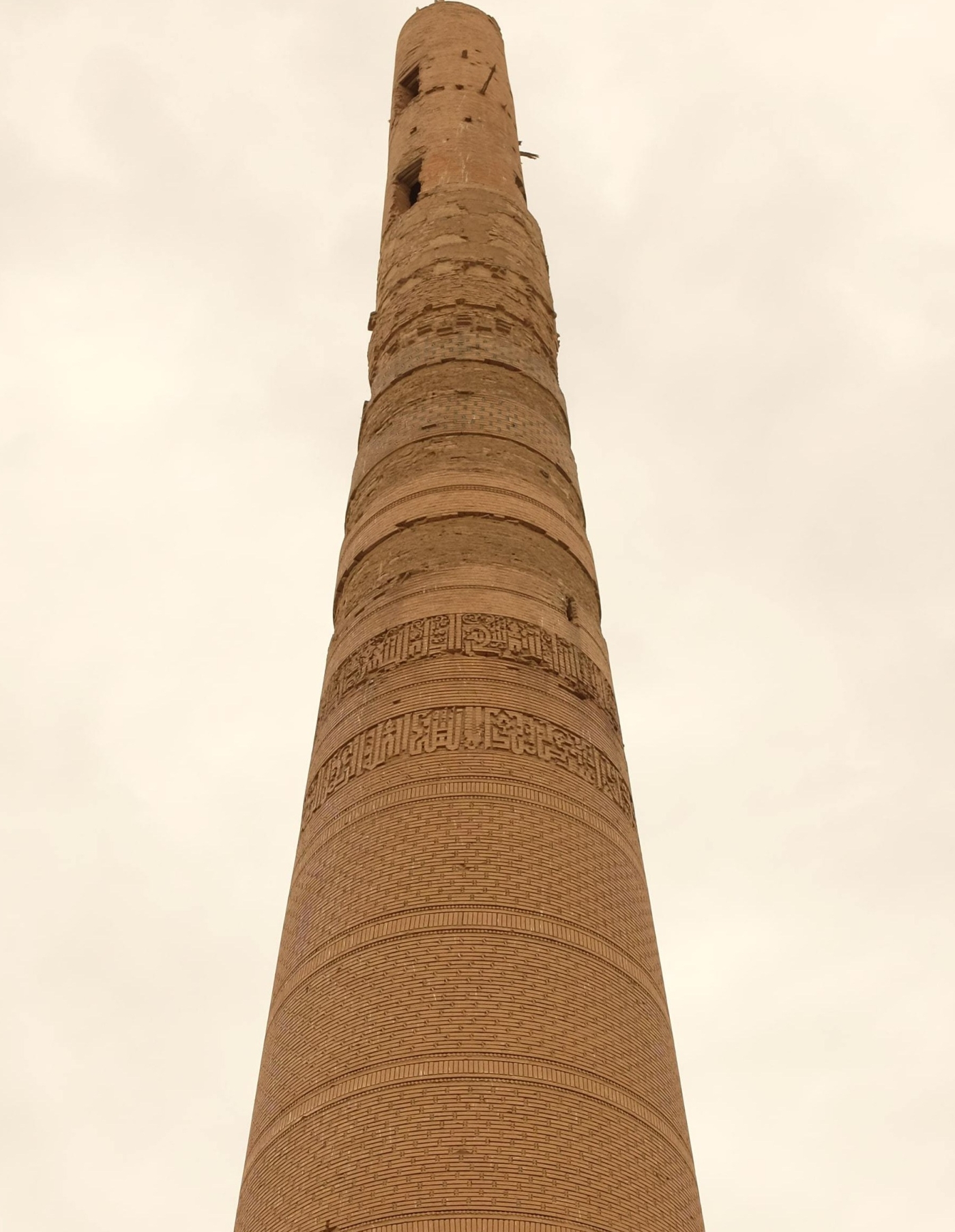 Visits to the museums of Ashgabat and Mary showed just how much art and history has been appropriated by the state to tell its story. Although this is not new in any way, as most states seek to legitimise its own rule through embedding itself in a rich historical past, what is interesting is to see how the cult of the leader is the end point of these museum displays. On first glance the section dedicated to the current president may sit awkwardly with the archaeological materials curated and displayed in these museums but on closer consideration it seems to make perfect sense that the president would want to see himself as the present day embodiment of the rich successful empires of the past. Berdimuhamedow is shown in all costumes, poses and professions. The president is simultaneously the embodiment of his rich cultural past, as well as the everyman, and the learned and benign president. A man for all occasions.

Despite all the talk of the new Silk Road, or China’s Belt and Road, in the press and academic circles, Chinese presence seems much less potent than one would believe. The presence of China, aside from everyday items, I saw little by way of Chinese presence. The new Silk Road has much to go in terms of creating the cultural and political influence of the past. Turkmenistan, well-endowed with natural gas, something of interest to China, does not have the trappings as seen in my visits to Ethiopia or Tanzania, where Chinese investments were significant. Nonetheless, having visited parts of the historical Silk Roads on this trip, it has created a deep sense of appreciation of the cultural exchange which are still visible today. The goods, people and ideas that flowed across the old Silk Roads illustrate the cultural heterogeneity of the region. Consequently, plurality of culture, ideas and people are critical to the flourishment of our own communities today.